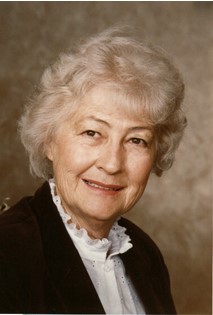 Guestbook 4
Graveside services for Marie O. Newlin of Riverton will be held at 1:00 p.m. Saturday, September 8, 2007, at the Bountiful Cemetery in Bountiful, Utah.

Marie Opal Weaver was born November 20, 1916, in Portland, Oregon, to Darell C. Weaver and Ada (Johnston) Weaver. She grew up in Buhl, Idaho, where she attended Buhl High School. She received her R.N. degree in nursing from LDS Hospital in Salt Lake City, Utah.

On April 5, 1939, she married Orville C. Newlin in Farmington, Utah. He preceded her in death.

She had lived in Ogden and Bountiful, Utah, and Laguna Hills, California, before making her home in Riverton in 1995.

Mrs. Newlin worked as a registered nurse in hospitals, public health, and schools in Salt Lake City and Bountiful.

In addition to her husband Orville, Mrs. Newlin was preceded in death by brothers Darell, Forest, and Dick Weaver; and sister Norma Smurthwaite.