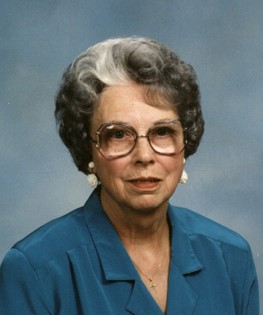 Mabel E. Scheele was born on January 20, 1919 in the farm home of her parents, August F. Scheele and Mary (Volzke) Scheele. Mabel was a native of York County, Nebraska.

Mabel married Fred Cox on June 25, 1939, and the newlyweds farmed and ranched in the Pavillion, Lander, and Riverton areas. Fred passed away in 1971 after which Mabel sold their farm and moved into Riverton. She worked for Richard Moss’ grocery store and McDonald’s Department Store.

In 1976 Mabel married Lawrence Lee Smith. She worked as cashier of the Koffee Kup Café which Larry and his daughter Tess owned for many years. Mabel and Larry enjoyed many years traveling together on cruises and in their motor home.

Mabel was a devout and lifelong member of the Missouri Synod Lutheran Church and of Trinity Lutheran Church since 1953. She was very active in the Lutheran Women’s Missionary League Circle Number One, and the Good Shepherd Auxiliary. Some of Mabel’s favorite hobbies included dancing, playing pinochle, quilting, gardening, sewing, and writing poetry. Her granddaughter Heather Bracken and great grandsons Evan Swihart and Jason Piercy were very special to her. A member of the Riverton Valley Grange, she was known for the beautiful flowers she grew, the lovely clothes she made, and loved for the poetry she wrote.