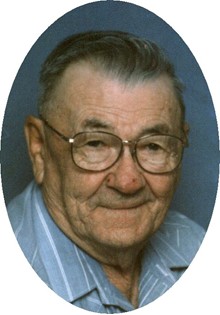 Funeral services for Nelson Parrish of Riverton are at 10 a.m. on Friday, Jan. 27, at St. Margaret’s Catholic Church in Riverton with the Father Killian Muli officiating.

Interment will be at Fort Logan National Cemetery in Colorado.

A rosary will be held at 7 p.m. on Thursday, Jan. 26, at the Davis Funeral Home of Riverton.

Nelson William Parrish was born on Wednesday, May 14, 1924, in Seward, Neb., the son of Nelson John and Anna Leota (Bouchard) Parrish. He grew up in Casper, where he attended schools. In 1940, his father homesteaded in Missouri Valley.

Mr. Parrish enlisted in the U.S. Army in June of 1943 and he served as a truck driver with the field artillery during World War II. He was honorably medically discharged on March 5, 1945.

He was preceded in death by his first wife, Earlyne and his brother, L.E. "Bud" Parrish.

On-line condolences for the family may be made at: theDavisFuneralHome.com

Arrangements are under the direction of Davis Funeral Home and Crematory of Riverton.