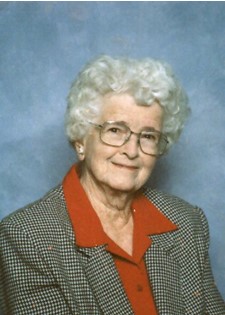 Guestbook 0
Mabel Talitha Tomberlin, 90, left on her final journey September 7, 2007, to be with the Lord. She was born November 23, 1916, in Whittlers Depot, Virginia. She grew up in Virginia and married Alvin Tomberlin on January 3, 1946, and moved to Wyoming, where she resided until 2000 when she moved to Colorado.

A loving, kind and gentle woman, her compassionate spirit touched all she encountered. She was known for her skills in the kitchen and many meals were shared around her table. Mabel loved gardening and especially liked growing tomatoes. She loved reading the Bible until the last year when her eyes failed. Over the years, Mabel made numerous baby afghans, quilts and blankets for her family. The past seven years, she has made receiving blankets for residents in the community where she lived when they had babies. She especially liked making blankets for pregnant wives of soldiers in Iraq or those returning home.

She was preceded in death by her husband of 53 years. Mabel is survived by a son, Jerry Tomberlin and wife Linda, of Ft. Collins, Colorado, and her daughter, Virginia Whitney and husband Jon, of Colorado Springs, Colorado. She will also be greatly missed by 7 grandchildren and 8 great-grandchildren as well as 3 sisters and 1 brother who reside in Virginia. A Memorial Service will be held at the First Baptist Church of Riverton, Wyoming, on Saturday, September 29th at 10:30 a.m.

Memorial contributions may be made in Mrs. Tombelin’s name to the First Baptist Church of Riverton, 840 N. 1st Street, Riverton, WY 82501.