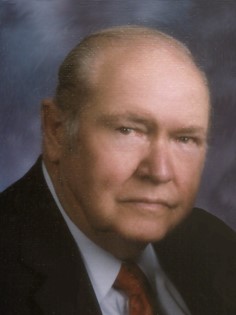 Memorial services for Darwin Morgan Wilson will be held at 1:00 p.m. September 28th, 2007at the Headwaters Center, Dubois, Wyoming with a commitment service to follow in the Dubois Cemetery with military honors.

Darwin died peacefully at home September 24th, 2007 with family members and close friends at his side. He was 84.

Darwin was born July 24th 1923 in Battle Creek, Michigan to Vernon and Flossie Wilson. He enlisted in the United States Army in 1944 and fought in the European theatre including the Battle of the Bulge. After 4 years in the Army, he was honorably discharged.

In August 1948, he married Elizabeth Makkay in Bamberg, Germany and returned to the United States with his bride in December, 1948. In 1950, on a trip to Yellowstone Park, Darwin and his family stopped in Dubois, Wyoming and never left. He became involved in the logging industry and ultimately ran his own logging operation and sawmill for many years.

Darwin enjoyed everything out-of-doors. He hiked, four-wheeled, shied, snow shoed, and snowmobiled; he was an accomplished fair chase hunter, fisherman, and taxidermist; and, his knowledge of the forest, and its flora and fauna, is without equal.

Darwin is survived by his wife and partner of 59 years, Elizabeth, daughters Susan Moffat and husband Travis of Lander Wyoming, Lisa Harrison and husband Pat of Laramie Wyoming, and Nora Steinbach and husband Mike of Dexter Kansas, six grandchildren, and three great-grand children. He was preceded in death by his parents, and brothers Zane and Richard.