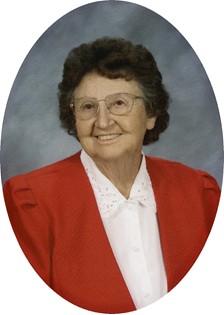 Guestbook 13
Darlene Frances Cooper, 87, died at Riverton Memorial Hospital on Sunday, March 11, 2012. Funeral services are at 2 p.m. on Friday, March 16, at the United Methodist Church of Riverton. Pastor Mark Thurman officiates and burial follows at Mountain View Cemetery in Riverton. Viewing is from 5 to 7 p.m. on Thursday, March 15 at the Davis Funeral Home of Riverton.

Darlene Schmuck was born on the family ranch 50 miles north of Douglas, Wyoming on Friday, Jan. 9, 1925, the daughter of Charley and Viola (Parrott) Schmuck. When the ranch dried up when she was 11 years old, the family moved to the Pavillion area. She told family she helped build the Pavillion Church by putting shingles on a hod for her father to put on the roof. She was graduated early from Pavillion High School on April 9, 1942. The students had gone to school on Saturdays so they could go to work on the farm or join military service.

She married Dale Cooper on Feb. 23, 1946, two weeks after his discharge from the U.S. Army Air Corps. The couple moved to their home on Cooper Road in 1947. Mrs. Cooper worked with her husband on the farm while raising their three children. She was a Cub Scout leader, started the Big Bend 4-H Club and was a leader for many years. Mrs. Cooper was an election judge for 40 years, belonged to an Extension Club, was a hospital volunteer for many years, a member of the United Methodist Church, held offices in the church, was a Sunday School teacher, and was active in the United Methodist Women.

She was preceded in death by her parents; husband, Dale; sisters, Velma Steenbock, Luella Hippe, and Erma Brooks of Riverton; and brother, Marion Schmuck, of Mackay, Idaho.

Memorials may be made to the United Methodist Church of Riverton, in care of the Davis Funeral Home of Riverton.