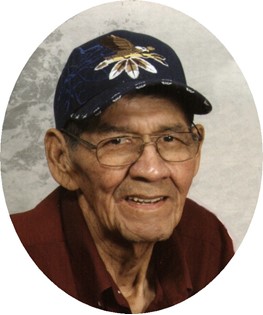 Funeral services for Leroy H. Lincoln, 74, of rural Riverton are at 10 a.m. on Friday, March 23, at St. Stephen's Catholic Church. Burial follows at the Arapaho Catholic Cemetery at St. Stephen's. Rosary is at 7 p.m. on Thursday, March 22, at the Davis Funeral Home of Riverton, with a viewing and wake following at the family home, 43 Oberg Lane, Riverton.

Mr. Lincoln died at the Riverton Memorial Hospital Sunday night, March 18, 2012. Leroy Howling Buffalo Lincoln was born in Canton, Okla., on June 17,1937, the son of Simon Arthur, Sr., and Rose Howling Buffalo. He served with the U.S. Navy and had lived in the Arapahoe area for 49 years. He married Pauline Little at St. Stephen's on July 21, 1962. He was of the Catholic faith.

Mr. Lincoln was a member of the Red Cedar Singers. He played fast-pitch softball, and watched St. Stephen's and Wyoming Indian High School basketball. His family said he liked pow-wows, enjoyed playing bingo and spending time at the casino, traveling, spending time with his grandchildren.

Mr. Lincoln worked on drilling rigs for Ormsbee Drilling Co. and he also worked for the Beaver Creek Oil Field Co. He was a heavy equipment operator for the Bureau of Indian Affairs for 21 years, retiring in December 2001. He served on the Arapaho pow-wow committee and the St. Stephen's school board.