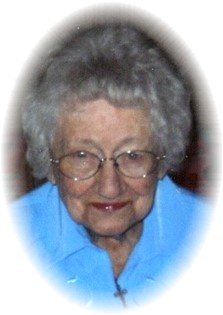 Funeral services are at 10 a.m. on Friday, June 22, at the Davis Funeral Home of Riverton with the Rev. Ian McFarland of the Cornerstone Community Church officiating. The Order of the Eastern Star committal rites will be held at Davis Funeral Home. Interment follows at Mountain View Cemetery in Riverton.

Visitation is from 5 to 6 p.m. on Thursday, June 21, at the Davis Funeral Home of Riverton.

Dulcie Lee Kenyon was born in Riverton on Jan.10, 1918, the daughter of Albert and Dulcie Lee (Doughty) Kenyon. She attended the Delfelder rural school, Jefferson elementary school, and was graduated from Riverton High School.

Mrs. Von Krosigk was of the Episcopal faith.

She was a life-member of the Order of the Eastern Star and the Rebekah Lodge.

Her family said she enjoyed canning, sewing, and bowling.

Condolences may be posted on-line at: www.theDavisFuneralHome.com