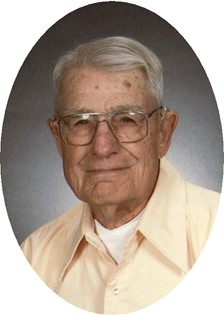 Joseph R. “Joe” Armstrong, 93, of Riverton passed away September 9, 2012 at his home in Riverton. Graveside services with military honors will be 2:00 p.m., Saturday, September 15, 2012 at Mountain View Cemetery. A celebration of life will follow at the VFW Club in Riverton.

Joseph Robert Armstrong was the 4th of eleven children born August 22, 1919, on a farm 12 miles north of Fort Collins, Colo., near Wellington to Elwyn David and Ruth (Rotscheck) Armstrong.

He married Margaret Ashburn and to this union three children were born. After moving to Walden and Gould, Colo. he worked in the timber industry until he started in the construction business operating heavy equipment.

In 1944 he joined the Navy and traveled both the Atlantic and Pacific Oceans, going through the Panama Canal three times in six months aboard the destroyer USS Barney and later aboard the cargo carrier USS Dade. At the time of discharge in 1946, he was in Charleston, S. Carolina, putting the USS Saufley in mothballs.

After moving to Riverton in 1974, he worked for C & H Construction, and later owned and operated his own crane business.

In 1989 he married Joan (Kelsey) Noah. Together they enjoyed camping, hunting, and fishing. He was an avid bowler and gardener. He was a lifetime member of the VFW.

Memorials may be made to the Amedisys Hospice in care of the Davis Funeral Home, 2203 W. Main Street, Riverton, WY 82501.