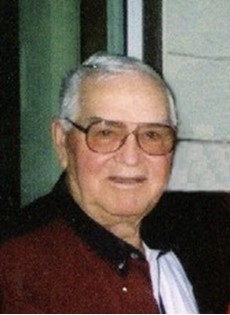 Jerrel Duty of Riverton died Friday afternoon, October 19, 2007 at his home. He was 84 years old.

Jerrel Duty was born on August 9, 1923 in Pontotoc, OK to Elzie and Beula (Glover) Duty. When he was 17 he and his brother Doug joined the U.S. Navy. He served in the Pacific Fleet during World War II.

When he was discharged from the Navy, he went to work for Amerada, a seismograph company, and began traveling around the middle United States.

He met Velma Weldon in Cody, WY and they were married there on December 13, 1947. They continued to move around the central United States, moving a total of 53 times. In 1972 they moved back to Riverton and made that their home.

After returning to Wyoming, he went to work for Fisher Drilling and worked in the Gas Hills and later drilled water wells in the Riverton, Lander and Dubois area.

The family said he loved gardening, fishing and camping. His favorite pastime was to sit around with his family telling stories of the war and all the places he had been.

He was preceded in death by his wife of 52 years, Velma; two brothers, his parents and one great grandchild.