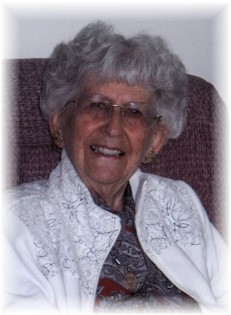 A funeral service will be held Friday, September 28, at 4 pm at Mt Calvary Lutheran Church, Dubois, WY. Following the service, all are invited for a meal which will be served in the church basement.

Violet Elaine Schilling was born at home in rural Sheridan County, Wyoming, on October 5, 1924, the daughter of August and Rose Schilling. She grew up in Sheridan and graduated from Sheridan High School.

She married Rev. Leo J. Fenske on November 10, 1942, in Sheridan WY. They lived in Kinnear, WY, Bellefont, KS, Natrona, KS, Leavenworth, KS, Pueblo, CO, Arvada, CO, Pendleton, OR, Hudson, CO, and Paonia CO as her husband served congregations in these communities. They were blessed with six children and were married for 49 years until his death in 1992.

Violet was a devoted wife and wonderful mother and grandmother. Her family said she enjoyed gardening, reading and puzzles of all kinds from Scrabble to crossword & word find puzzles. After her children were grown, she was active as a hospital volunteer, census worker, and a school cafeteria aide.

At the time of her death, Violet was a member of Mt. Calvary Lutheran Church. She was a devout Christian, active in her church life, a prayer champion and a peacemaker.

For those desiring to give a memorial gift, the family suggests Mt. Calvary Lutheran Church, PO Box 707, Dubois, WY 82513.