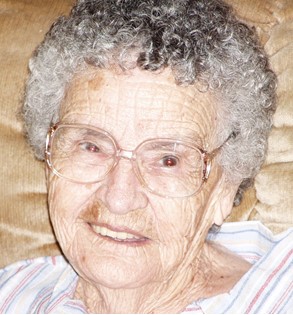 Guestbook 0
Former Riverton resident Dolores Abeyta died at her home in Casper on Tuesday morning, Oct. 23, 2007. She was 92 years old. Funeral services will be at St. Stephen's Mission south of Riverton at 10 a.m. on Thursday, Oct. 25. Internment will be at Mountain View Cemetery in Riverton. Dolores Sanchez was born on May 5, 1915, in Ocate, N.M., to Manuel and Mariquita (Santestevan) Sanchez. She grew up in New Mexico, attending school and was graduated from high school in 1935. She married George Abeyta in November of 1937. At the time they met, both were working for the same employer. Soon after they were married, Mr. Abeyta went to work in the coal mines. During those years, Mrs. Abeyta was a housewife and mother. When the mines in New Mexico closed, the couple moved their family to Reliance, Wyo., where Mr. Abeyta resumed his career. In 1953, the family moved to Riverton and worked for farmers George Heil and Jim Beckman on Riverview Road. The children worked side by side with their parents. In the winter of 1962, Mr. and Mrs. Abeyta purchased a small farm in the Lander area and remained there until 1988. Two years after Mr. Abeyta died, Mrs. Abeyta moved back to Riverton to be closer to her children and lived here independently until 2005. After becoming ill and no longer able to care for herself she moved to Casper to reside with her daughter and son-in-law. Mrs. Abeyta is survived by four children, Corn and his wife of Spokane, Wash., James and his partner of Riverton, Dan and his wife of Rock Springs, Liz Mace and her husband of Casper; 17 grandchildren, 48 great grandchildren, and seven great-great grandchildren. She was preceded in death by her husband; daughter, Georgia Hernandez; son, Ed Abeyta, and grandson, George Lucero. Memorials may be made to the Central Wyoming Hospice Center at 319 South Wilson, Casper, WY 82601. On-line obituaries are available and condolences for the family may be made at: thedavisfuneralhome.com Local arrangements are under the direction of the Davis Funeral Home of Riverton.