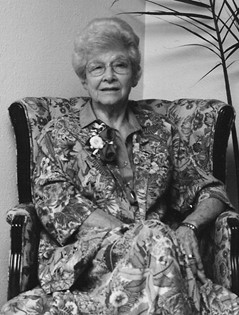 Guestbook 8
Dorothy Shaw of Lander died surrounded by her family on October 31, 2012 at Lander Valley Medical Center. She was 98 years old. According to her wishes, cremation has taken place. A private family service will be held. A reception will be held for family and friends on December 1, 2012 from 11:00 a.m. to 2:00 p.m. at the Holiday Inn Express.

Dorothy Ilene Hetherington was born on November 23, 1913 in Boise, Idaho, the daughter of Almon Hetherington and Grace (Hammack) Hetherington. She spent her early years in Emmett, Idaho.

She married Homer J. Shaw on August 16, 1936 in Emmett, Idaho. The couple spent their early-married years in the Emmett community, where their first son was born, and for a brief time in Caldwell, Idaho. In 1940 they moved to Stibnite, Idaho, a mountain mining camp, where they lived until 1952. Two more sons were born to the couple there, and the family said those years formed the highlight of family memories. Closure of the Stibnite mine eventually brought the family to Riverton, Wyoming in 1956. Homer worked for Lucky Mac Uranium Mine and when their three sons were out of school, Dorothy worked for 15 years at Holter’s Gift Shop and The Place. Homer retired in 1980, and the couple enjoyed an active retirement until his death in 1999.

In 2002 Dorothy moved to Lander to be closer to family.

Her family said Dorothy will be best remembered for her love of people. She enjoyed cooking for guests, playing bridge, and socializing with a large group of friends and family. She was well known for her beautiful gardens and her “green thumb”. Her favorite eating establishment was the world famous Svilar’s Steakhouse in Hudson, Wyoming.

She was an active member of Chapter BB, P.E.O, Daughters of the Nile, and Ponderosa.

She was preceded in death by her parents, her husband, Homer in 1999, her brother, Jack Hetherington, and two sisters, Helen Sanders and Annabell DeMoss.

Memorials may be made to the Shriners Hospital in care of Davis Funeral Home.