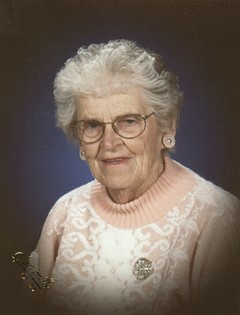 Guestbook 0
Funeral services for Charlotte A. Linsdau will be at 11 a.m. Saturday, Dec. 8, at St. Margaret's Catholic Church in Riverton. The Rev. Father Drew Duncan will officiate.

The rosary will be said at 7 p.m. Friday, Dec. 7, at the Davis Funeral Home of Riverton.

Charlotte Ann Snowden was born in Milwaukee, Wis. on March 28, 1917, the daughter of Arthur and Catherine (Davey) Snowden.

Her family said Mrs. Linsdau loved to cook and bake and the family especially enjoyed her gingerbread cookies at Christmas time.

She was preceded in death by her husband of 56 years, Walter; one grandson, and a sister, Betty Snowden.