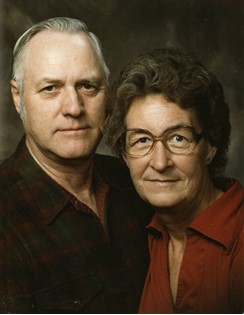 Funeral services for accident victims Loren and Betty Farrens of Pavillion will be at 10 a.m. Saturday, Dec. 15, at the Davis Funeral Home of Riverton. Pastor Cleve McSwain will officiate and military honors will be afforded.

Cremation will follow the services and inurnment will be at Mount Hope Cemetery in Lander at 11 a.m., Tuesday, Dec. 18.

A luncheon will follow Saturday's services at the VFW Club in Riverton.

The couple died at Riverton Memorial Hospital on Friday morning, Dec. 7, 2007, at the result of injuries suffered in a two-vehicle accident north of Riverton. He was 79 years old and she was 76.

Loren W. Farrens was born on the Van Vleet property in Hudson on March 2, 1928, the son of Elmer Farrens and Alma Opal (Cantrell) Farrens.

Betty Nelson was born in Laramie on April 28, 1931, the daughter of Fredrick "Nels" Nelson and Elizabeth Ruth (Anderson) Nelson. She attended the Riverton schools.

Mr. Farrens was a government trapper and deputy sheriff in Lovelock, Nev., in the late 50s. They returned to Wyoming and he operated large trucks and heavy equipment at the Kennecott Mines in Kimberly, Nev., and Knutson Mines in Kemmerer. He later worked for Dick Truck Lines in Colorado Springs, Colo., and Wyoming.

For the past 25 years, the couple had lived in Pavillion.

She was a past councilwoman for the town of Pavillion and a member of the Wyoming State Historical Society, Eagles Auxiliary in Riverton, the Meadowlark Sams Good Sam Club of Fremont County.

Mr. Farrens was an advocate for the Handicap Minority Group of Wyoming in 1980 in Kemmerer, and was a member of the I.O.O.F. in Riverton, the Meadowlark Sams Good Sam RV Club, the B.P.O. Eagles in Riverton, and the Wyoming State Historical Society.

Their family said the couple enjoyed their association with the Good Sam members and the trips they took. Mr. and Mrs. Farrens were honored at the Dec. 10 meeting of the Good Sams in Riverton, replacing the planned Christmas party.

Mr. Farrens' survivors also include a brother, Gerald Farrens of Jacksonville, Fla., and a sister, Marilu O'Malley of Riverton.

He was preceded in death by his parents, Elmer and Opal Farrens.

Mrs. Farrens is also survived by a brother, Martin Berg of Denver, Colo., and a sister, Dorothy Bays and her husband, John L., of Casper.

Memorials may be made to a charity of the donor's choice, in care of the Davis Funeral Home, 2203 West Main, Riverton, WY 82501