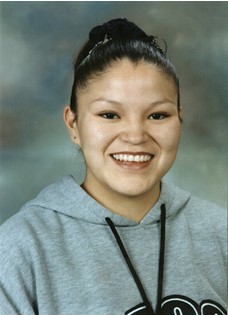 Guestbook 4
Dina Spoonhunter of Arapahoe died Sunday morning, April 15, 2007, in a traffic accident on 17 Mile Road. She was 23 years old.

There will be a viewing at the Davis Funeral Home of Riverton from 7 to 8 p.m. on Tuesday, April 17.

She attended schools at Arapahoe, Wyoming Indian, and in Bismarck, N.D. She grew up on the Wind River Indian Reservation but had lived in North Dakota for a few years.

Ms. Spoonhunter was a member of the Catholic faith and the Native American Church.

Ms. Spoonhunter was a cook and had worked at the Northern Arapaho Ranch, Burger King, Holiday Inn, and Comfort Inn and Suites.