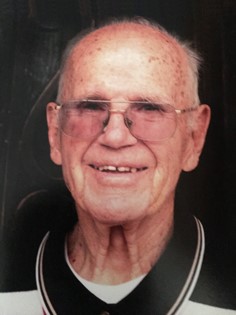 Jack Ratliff, 90, of Riverton died on Thursday, January 19, 2017, at the Wind River Rehabilitation and Care Center. A memorial service will be held at 2:00 pm on Saturday, February 25, 2017, at Davis Funeral Home. Inurnment will follow at Mountain View Cemetery with full military honors.

Jack Charles Ratliff was born on February 17, 1926 in Gering, NE to Alfred Finch and Mildred Irene (Ash) Ratliff. When he was seven years old the family moved to Riverton, WY where he lived for the next 83 years. He attended Jefferson Elementary School and graduated from Riverton High School with the class of 1944. He enlisted in the Army Air Corp upon high school graduation. After being Honorably discharged he returned to the University of Wyoming and graduated with a Business Degree. He later returned to college to become a teacher. Jack was an exceptional football player for Riverton High School and the University of Wyoming. His nickname was “Golden Arm Ratliff”. He also excelled in boxing and was part of the boxing team in the Army. Jack traveled to Australia as a chaperone for the University of Wyoming football team.

He was baptized into the Episcopal faith and attended St. James Episcopal Church.

After returning from college, Jack started his own company, Jack Ratliff Insurance Agency. After selling his agency he became a real estate broker and realtor, he sold many houses and lots in Riverton and even selling lots in Alpine, WY. He was also the co-owner of Ships Tavern and Johnny’s Bar in Riverton and owned the Rustic Lodge in West Yellowstone. Upon returning from earning his teaching degree he taught Business at Riverton High School until his retirement. Throughout his lifetime he was a referee for basketball and football. He was a sponsor and chaperone for the Boys State for many years. He drove the boys himself which in instances was the only way some of the boys were able to attend.

Jack was a very involved member of the American Legion in Riverton where he was the Post Commander. His vision was to honor all Fremont County military that died in any war so he was instrumental in refurbishing the Odd Fellows Cemetery on Riverview Road which now has a white cross representing each military member. He was also involved in the Avenue of Flags which is to display the American flag in front of businesses down Main Street for every Federal Holiday. He went to each business and set up an annual fee for them to have the Legion place the flags and to this day it is a tradition. He was honored as a Wyoming State Legionnaire. He also was invited to take part in the Honor Flight to visit the World War II Memorial in Washington D.C.

Besides his heavy involvement in the Legion he was also a member of the Elks Club in Riverton where he was an Exalted Ruler and competed in statewide competitions where his group won the top honors. He was a member of the Masonic Order in Riverton where he was the Worshipful Master and became a Master Mason and joined the Shriner organization. Jack participated in the Clown Unit which entailed handing out candy for local parades and collecting money from businesses for the Shriner Circus so children could get a free ticket. He was also a member of the Forty and Eight which raised countless funds for scholarships for nurses attending Central Wyoming College.

Jack’s passion was being a Wyoming Mountain Man and he was instrumental in reviving this organization. He organized the Mountain Men to march in the LBJ Inauguration parade in January 1965 and the Reagan Inauguration parade in January 1985; the Mountain Men also came together in July 1976 to represent Wyoming in the Parade of States for the nation’s bicentennial in Philadelphia, Pennsylvania. Several members of his family attended this event. His family donated his mountain man outfit and accessories to the Wind River Heritage Center on Federal Blvd. in Riverton and it is displayed with a wax figure depicting “Cactus Jack”, his mountain man name, with all the surroundings. Jack loved to play golf and he was the Golf Coach at Riverton High School for several years. In the summer he played golf every day and participated in many tournaments. Jack and Rachel enjoyed living at the golf course by Hole #7.

Above all else Jack loved getting together with his family it was a highlight of his life.

He was preceded in death by his parents, Alfred and Mildred Ratliff; wife, Rachel Ratliff; brothers, Gene Ratliff and Bill Altholf; and sister, Gwen Altholf-Jacoby.

Memorials may be made to the Jack and Rachel Ratliff Education and/or Business Scholarship at CWC in care of Davis Funeral Home, 2203 West Main Street, Riverton, WY 82501.