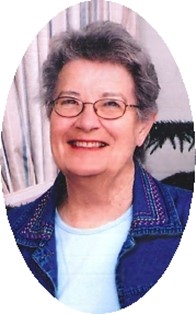 Carol was born in Worland, WY October 13, 1931 to Earl T. Bower and Hilda (Reesey) Bower. She was raised in Worland where she was very active in school and civic organizations. She was a member of the National Honor Society, Thespians, Job’s Daughters, and musical groups. She was also very active in her church.

She married William W. Day IV on June 14, 1949. They lived in Worland where he worked for the Pure Oil Co. While Bill served in Korea with the Worland National Guard, Carol lived with his parents.

Carol was a very talented musician, artist, and a wonderful wife and mother. She was devoted to her church and was truly a child of God.

They lived in many places while Bill pursued higher education and then his career. Carol was busy raising their 5 children and participating in their many activities such as Girl and Boy Scouts, Job’s Daughters and their church groups. They then moved back to Wyoming where Bill took the position of President of Central Wyoming College in Riverton.

In 1981, with all the children grown and gone, they decided to work overseas. Bill and Carol were on the faculty of Hong Kong International School, where Carol worked with elementary age students. During this time they did extensive traveling to many parts of the world including all seven continents. While living in Hong Kong Carol was selected to sing with the Hong Kong Oratorical Society that traveled to many venues including: Beijing, China; Kula Lunpur, Indonesia; Singapore and Taiwan.

Once back in Riverton, after retirement, Carol continued to be active with musical groups, church activities and PEO. She also spent many happy hours gardening, doing needle work and reading.

She is survived by daughters, Linda Burnette and husband Garry of Riverton, and Margaret Jamieson and husband Bill of Pharr, TX; sons William W. Day V and wife Bonnie of Madera, CA; Timothy Day of Las Vegas, NV. She is also survived by 11 grandchildren, three great grandsons and sister, Alice Garms and husband Gene of Portland Oregon and brother George Bower and his wife Mary Evelyn and sister-in-law Ruth Bower of Worland as well as many nieces and nephews.

In lieu of flowers, the family requests donations to the Kenneth Day Scholarship at Central Wyoming College or the charity of your choice.