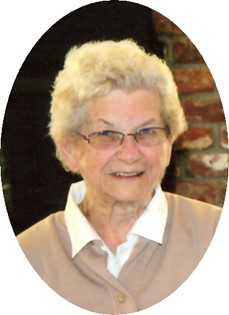 Guestbook 5
Anita Rose Conley 91 of Riverton, Wy passed away peacefully on Monday, May 1st at the Central Wyoming Hospice Kloefkorn home in Casper surrounded by her sons Bob, Dan, and Jeff.

A memorial service will be held on Friday, May 5th at 3pm at Our Lady of the Woods Catholic Church in Dubois. A reception will follow at the senior Center in Dubois.

Anita was born on August 3, 1925 in Kingsford, Michigan to the late Florence and Albin Elffors. Her father passed when she was very young and her mother remarried Martin Austin, who raised her as his own. She was the 5th of 9 siblings. She graduated from Laona High School in Laona, WI in 1943.

While in high school, Anita met Arnold Conley who would be her partner in this life for the next 70 years. They were married on January 19, 1946 in Crandon, WI. Together they had five children-Kathy, Mac, Bob, Dan and Jeff.

The family moved from Laona to Dubois in 1962 where Anita spent her time being a wife and mother. As her children grew up she worked at various places in Dubois including the Dubois Museum. She also enjoyed her friendship with what her family has called "the coffee ladies" who met daily at the Ramshorn Inn to discuss the days' events, socialize, and get in a little exercise.

In 1994 Arnie and Anita moved to Riverton and at the age of 70 she also assisted her daughter-in-law Tina by working at her childcare in Riverton. She instilled her love of reading to the children in her charge and often 10 small children would be seated around her as she read aloud to them. She took pride in always having a meal on the table for anyone who gathered there, she was an avid baker and we will forever miss her strawberry rhubarb pie and the always present supply of homemade cookies.

She was preceded in death by her parents, all of her brothers and sisters except for Lorainne Dehart of Crandon, WI, her husband Arnie, son Mac, daughter Kathy, and great grandsons Hunter and Jude.

Memorial donations in her name can be made to Hospice.