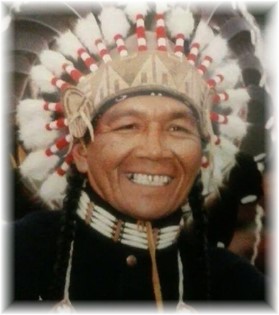 Therin Odyss Soldier Wolf was born on January 28, 1962 in Lander, WY to Mark Joseph and Florita Revena (Brown) Soldier Wolf. He was the great grandson of Chief Sharpnose and Chief Solider Wolf. He was given his Indian name of “Blue Duck”. He grew up on the Wind River Reservation and graduated from Riverton High School. After high school he attended Job Corp in Utah where he received numerous certificates for auto mechanics, cultural monitoring, firefighting, NAGPRA (Native American Grave Protection and Re-Patriatron Act) and Cultural Resource Management.

After completing Job Corp he returned to the Wind River Reservation where he lived all of his life. He traveled to different places and always came home to the place he loved and wanted to protect and preserve for future generations.

He was an Archaeological Technician with the Arapaho Tribal for over 35 years. He was on the THPO Advisory Board Council. He was a mentor for younger people wanting to learn the preservation of the tribal land, customs, and the culture. He was also a seasonal firefighter with the Arapaho Tribe. He was an avid protector of his traditional life and elders. He took his work ethic seriously and always made sure the job he was doing was done correctly the first time. He was the last one to leave a work site no matter what ever he was doing or where he was. He was well known for his carpentry work. If he didn’t know how to do a project he researched it until he could do it correctly.

He was baptized into the Catholic Faith and also participated in the Northern Arapaho Sundance. He attended sweats to pray for all people and also danced with prayers for everyone.