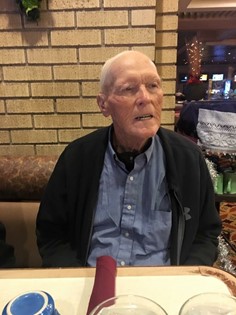 Wesley William King was born on January 3, 1926 at home in Cherry County, NE near Kilgore NE to Robert and Florence (Hendershot) King. He grew up with two brothers and two sisters on the family farm. He attended schools in Kilgore, NE.

He was a member of the Episcopal faith.

On June 28, 1944 he enlisted in the U.S. Army and served during WWII. He was a rifleman with the 134th Infantry. He shipped out to Belgium arriving on December 29, 1944. He was in combat at the Battle of the Bulge when he was wounded in action on January 13, 1945 and received a purple heart and a bronze star. He was in the hospital until returning to the United States on April 14, 1945. He was honorably discharged on July 30, 1945.

After the war he returned to Nebraska where he worked on farms in the area. He met his wife, Harriet Elizabeth Pike Beman, at the café she owned in Aurora, NE. They wed on December 8, 1952. They had one son, Gary and one daughter, Elizabeth. They were married for 56 years before she passed on December 11, 2008.

In 1972 the family moved to Riverton where Wesley worked as heavy equipment operator and truck driver at the Pathfinder Uranium Mines in the Gas Hills. He also managed the Park Avenue Trailer Park with his wife from 1973 to 1988. The family made their home on Columbine Lane where he lived for 40 years.

He had lived in Elko, NV for the last three years around family. He enjoyed being outside in his garden and doing yardwork.

He was preceded in death by his parents, Robert and Florence King; wife, Harriet King; brothers, Roy King and Clinton King; and sisters, Marjorie King and Mildred King. Memorials may be made to Help for Health Hospice Home in care of Davis Funeral Home, 2203 West Main Street, Riverton, WY 82501.