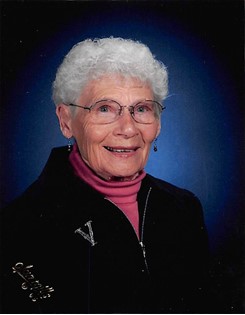 Veronica Gertrude Koetter was born in Minot, ND on August 28, 1923 to John Herman and Theresa (Klosterman) Koetter. She grew up and attended school in Rural Ward County of North Dakota.

She was baptized into the Catholic faith and was a dedicated member of St. Margaret’s Catholic Church.

On November 5, 1949 she married Melvin Richard Moen in Minot, ND at the St. Leo’s Catholic Church. They shared 64 years together until Mel’s passing in 2013.

Veronica and Mel were both employed at Bausch & Lomb Optical Company in Minot before moving to Casper, WY to work for Western Optical Company. In 1961 they made the move to Riverton, WY to work in the new practice of Dr. William Lansing, Optometrist (now Riverton Vision Center). Mel worked as the Optician and Veronica was the Office Manager, which meant she helped with everything. The both stayed until their retirement. They both devoted a lifetime of helping better people’s vision working side by side.

She was a dedicated walker out on the trails rain or shine. In her younger years she was into bowling, square dancing, camping, boating, water skiing, and road trips. Every year for 50 years they would travel to North Dakota on Father’s Day to the Moen family reunion. Although it was the Moen side, her family always showed up so it was really a “full” family reunion. After retirement and high on their priority list, she and Mel again side by side were always hunting for the elusive artifact or precious rock. She also enjoyed playing cards, doing genealogy and having fun trips and adventures with her most beloved and devoted daughter, Patricia and special friend, Kim.

Memorials may be made to Help for Health Hospice or St. Margaret’s Catholic Church in care of Davis Funeral Home, 2203 West Main Street, Riverton, WY 82501.