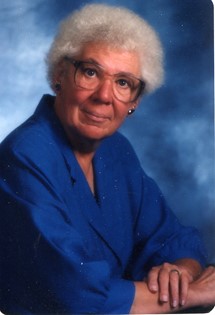 Margaret Coffey was born on February 16, 1933 in Oxford, Nebraska. She was the oldest of three daughters of Tom and Zelma Coffey. She grew up in the small town of Alma, Nebraska, graduating from high school there.

After high school she attended Hasting College for four years, graduating in 1954. Her majors were business and elementary education. She then taught in the schools in Scottsbluff and Lincoln, Nebraska.

A move to Denver saw her employed as a secretary to the vice president of Ringsby Truck Lines. In Denver she met and married her husband of 59 years, Wade Dent.

The couple moved to Lander where they purchased Denny Plumbing and Heating, Co. and made their home there in 1962. Margaret taught five years at Arapahoe, helping set up their first Headstart program. She then turned to the plumbing company, becoming active as secretary and bookkeeper.

She enjoyed taking long walks, keeping books, working on her latch hook rugs, participating in water aerobics, and attending both Eastern Star and PEO where she was 50 year member of both.

Her parents and a son Thomas Dent preceded her in death.