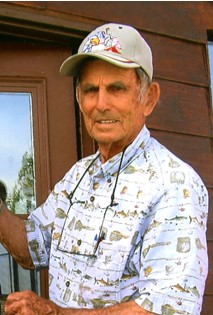 Charles Ely German, age 98 and 11 months, passed away in his sleep, of old age on September 2, 2017. Cremation has taken place and no services will be held at his request.

Charles was born on October 17, 1918 in Seward, NE to Clair and Emma German. His parents were 3rd generation bakers who worked and lived the majority of their lives in Sioux City, Iowa.

Charles entered the U.S. Navy as a baker in WWII and served in many battles in the Pacific including, Guadalcanal and The Solomon’s. He was in the Naval Contingent who first entered Nagasaki Japan after the U.S. dropped the Atomic Bomb to end the war.

In 1939 he married Dorothy Blanch Lynn in Nebraska. They had two children, Charles Russell German in 1941 and Lynda Zoe German in 1946. The family moved to Thornton, Colorado in 1958 where he established himself as a professional baker at King Soopers Bakery. He retired from the bakery in 1980.

Charles was a taciturn man by nature, who grew up in the hard times of The Great Depression. Yet, he was always generous to his relatives and strangers in need. He did not make friends easily but when he threw you a smile, you wanted to get to know him better. During the last 14 years of his life, he lived in his own little house on his daughters’ (Lynda Z. German) place at Sweetwater Station, Wyoming. He enjoyed making dozens and dozens of oatmeal cookies for the neighbors at Sixth Crossing, traveling once a week to The Wind River Casino, sitting in a chair fishing on the banks of The Sweetwater, playing cards with relatives (especially his daughter) and friends, building fences, sheep barns and chicken houses with his daughter-in-law, Polly Hinds and of course watching Wheel of Fortune.

His only grandson, Ryan James German (USMC Master SGT. RET.) was his pride and joy. During his grandson’s early childhood he was a mentor, fishing buddy, and steady companion to him. Charles shared his wry humor and arrow-sharp wit with his grandson and they understood and loved each other well.

Memorials may be made to Boys Town or The Paralyzed Veterans of America in care of Davis Funeral Home, 2203 West Main Street, Riverton, WY 82501.