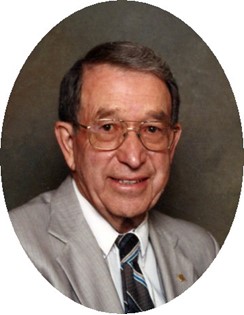 Graveside services for Robert Charles Ransom, 89 of Dubois will be Friday, September 22, 2017, at 1:00 pm at the Memorial Gardens Cemetery in Casper, WY with military honors.

He was born September 29, 1927 in Prairie Grove, Arkansas to William and Mattie (Ingram) Ransom. The family moved to Laramie, WY where he graduated from Laramie High School in 1945. He enlisted in the U.S. Navy and was a veteran of World War II.

On June 30, 1950 he married Carolyn Garrett in Casper, WY. Bob began working for Western Airlines in 1953. They lived in Phoenix, Minneapolis, San Francisco, and Salt Lake City before retiring from Delta Airlines in 1982. They retired to Dubois, WY. Carolyn passed away shortly after moving there. Bob later married Ruth Stanley in Dubois on October 1, 1988.

Bob loved to golf, fish, and be with family and friends. Bob’s entire life revolved around his love for God and his family.

He was preceded in death by his first wife, Carolyn (Garrett) Ransom in 1985; his parents, William and Mattie Ransom, two sisters, Eunice Mae Rhodes and Helen Byers; and step-daughters, Paula Pirman and Sheryl Castelli.