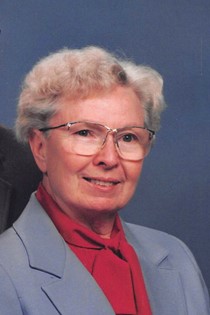 Dolores V. Rowan was born on March 10, 1930 in Fleming, CO to Russel Lloyd and Bessie Lovina (Irish) Rowan. She grew up with her sister and four brothers in Fleming, CO. While she was in high school she worked at the Fleming Library as an unpaid volunteer helping the community and the local women’s club to keep the library open when the librarian left. After graduating high school in Fleming, CO she attended college at Colorado State and then earned her master degree at the University of Colorado in Greeley, CO.

After graduation from college she taught in Evanston for three years before she went on an adventure to Pepperrell Air Force Base near St. Johns, Newfoundland, Canada where she taught at the Senior High School for one year. She said that was “quite a trip”. Upon returning to the United States she taught one final year as the junior and senior Home Economics teacher in Iliff, CO, commuting from Sterling, CO.

On August 5, 1956 she married her husband Arthur John Wolfe, in Sterling, CO at the United Methodist Church, they were married 61 years, Reverend Kleen officiated. They made their home in Sterling, CO where she worked at the local nursing home office for two years, then to Fort Morgan, CO where their first son, Douglas, was born. Their second son, Eric, was born after they moved to Greeley, CO. They then moved to Kersey, CO before moving to Riverton, WY making it their forever home.

Dolores enjoyed reading, sewing, embroidery and oil painting. She did try knitting and actually knitted two sweaters for her son, saying “knitting not my thing” but the sweaters were “ok”.

She was preceded in death by her parents, Russell and Bessie Rowan; sister, Alice Mock; and brothers, Gene Rowan, Arlyn Rowan, and Carl Rowan.