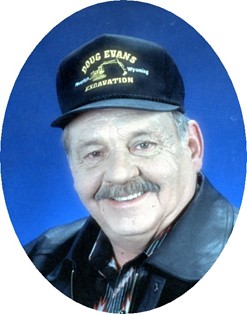 Paul Douglas Evans was born on March 4, 1942 in Pocatello, ID to Paul Douglas and Janness (Barnes) Evans. He and his five siblings were raised in Pocatello, ID. He graduated from Pocatello High School with the class of 1960. While in high school he was awarded All Conference in football earning him a scholarship to Ricks College.

On August 13, 1961 in Bannock County, ID he married Nancy Lee Kynaston. They had three children, Kevin, Rowdi, and Jenni. They later divorced.

He was an ambitious worker and enjoyed working. He worked for Intermountain Chevrolet for three years before starting his first business, E & M Automotive which he ran until starting his second business, Henderson Oil. In 1976 he moved to Riverton where he started his third and final business, Doug Evans Excavation, he ran this company until he retired in 2015 at the age of 73. But retirement to Doug did not meaning doing nothing, he started helping his son, Kevin, restore vintage automobiles.

He enjoyed football, was an avid hunter and fisherman, and loved the outdoors. His passion for helping his son with the vintage cars became a hobby he loved. Together they restored three Chevrolet Corvettes that were his personally.

“You will be greatly missed. We love you Dad.”

He was preceded in death by his parents and his sister, Deborah Evans.