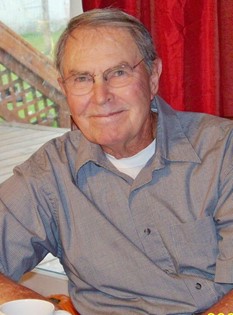 Guestbook 0
Myron D. Johnson, of Riverton, passed away October 3, 2017 at Wyoming Medical Center in Casper. He was 85 years old.

Memorial Services will be held at 2:00 p.m. on Wednesday, October 11, 2017 at Davis Funeral Home. Inurnment of his ashes will follow the service at Mountain View Cemetery in Riverton.

Myron was born November 23, 1931 to Ernest C. and Lois (Wright) Johnson, in Jackson County, Minnesota. He was the youngest of 5 children. Myron grew up farming with his family in Southwest Minnesota. Myron attended Windom High School graduating in 1950. He married the love of his life Evelyn P. Johnson on December 31, 1950. They had 5 Children.

Myron began working for Elk River Concrete in Windom. He accepted a transfer and moved his family to Riverton, Wyoming in 1965. There he worked as Superintendent of Riverton Concrete Products. Myron retired after 46 years with the Cretex Corporation.

He had a great love for the beauty of Wyoming. He loved to fish, hike, find wild flowers, and stargaze. But most of all he was happiest when sharing all of this with his friends and family.