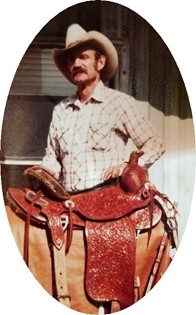 Guestbook 17
Dallas Myers, of Riverton, passed away peacefully in his sleep on the evening of October 22, 2017. A viewing will be held on Monday, November 6, 2017 from 5:00-7:00pm. Funeral Services will be held at the Davis Funeral Home on Tuesday, November 7, 2017 at 10:00 am. Interment will follow at Mountain View Cemetery followed by a time to reminisce at the Heritage Center at the Fremont County Fair Grounds.

He is the son of the late Theodore Orin Myers and Irma Smith-Myers. Dallas was born in Eureka Springs, Arkansas and moved to Casper when his family homesteaded on the Poison Spider. Dallas attended school at Natrona County High School he finished his education on a round up wagon with the Bug Ranch, Ben Roberts.

Dallas was one of the last of his kind, some say born a century too late. Dallas loved Cowboyin’ and spending time with his family. He was a self-employed saddle maker in Riverton for over 40 years. His favorite pastime was building harnesses and training teams to pull.

Dallas is survived by his two sisters, Patricia of California and Joy of Washington, three sons, Travis, Dal, and Cody, his two daughter in-laws, Crystal and Leslie Myers and his 10 grand kids.

Dallas was preceded in death by his brother Kenneth.

Memorials may be made to Ready to Ride Bull Riding School in care of Davis Funeral Home, 2203 West Main Street, Riverton, WY 82501.