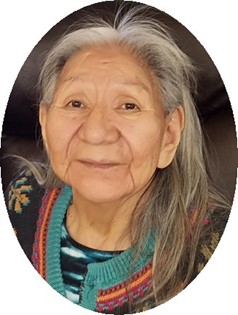 Guestbook 3
Funeral services for Mary Ann Whiteplume-LeBeau, 76, will be held 10:00 a.m., Thursday, December 28, 2017 at Davis Funeral Home. Cremation will follow services and inurnment will be held at Whiteplume Cemetery at a later date.

She was born on November 3, 1941 in Fort Washakie, Wyoming, daughter of James and May Hungary (Wolf) Whiteplume. She was given the Native American name of “Enjoy Walker”

She attended schools at Fort Washakie and St. Michael’s Mission. Mary lived most of her life in the Fremont County area.

Mary worked as a nurse for around 3 years at the Bishop Randall Hospital in Lander, WY. She also worked as a store keeper at the old Ethete Store for a couple of years in the 1970’s, worked for Meals on Wheels in the early 1970’s, and was a dispatcher in Fort Washakie in 1979 and 1980.

Mary was a member of the Episcopal faith. She raised several nieces and nephews and raised Lyndell, John, and Mona as her own. Mary enjoyed working puzzles, reading magazines and buying blankets from the dollar store. She enjoyed going for walks every day and singing her Native Songs. She was known as “Grandma Love” to all of her grandchildren whom she adored.

She was preceded in death by her parents, son, Curtis; brothers, Jule, Stanley, Theodore and Jackie; sisters, Laura, Ruth, Gladys Mae and Alvena.