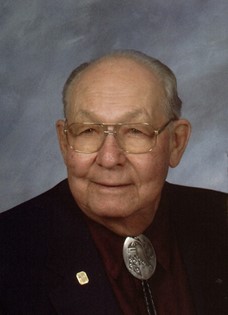 Guestbook 4
M. J. ‘Dick’ Gilpatrick, a key person in the building of Wyoming's highway system, died Friday night, April 27, at the age of 79. Funeral services will be at 10:00 am Friday May 4th at United Methodist Church in Riverton with a public viewing at 9:00 am. Mark Justice Gilpatrick was born July 15, 1927 to Myrtle (Houser) and Mark Justice Gilpatrick, Sr in Riverton, Wyoming. He was graduated from Riverton High School in 1945 and attended one year at the University of Wyoming before returning to Riverton and the family business, Gilpatrick Construction. In January of 1948 ‘Dick’ married his childhood sweetheart and soul mate, Viola L. Weber. They had almost 60 years of joy, happiness and love. ‘Dick’ and Viola had two children, Phyllis Mary and Richard Mark. Dick Gilpatrick loved his role in building in the State of Wyoming. He worked for his father during his high school years and later, along with his brothers Gerald and Dennis and close friends and business associates Paul Goedicke and John DeBortoli took the business over and created a successful, productive, completive, large employment source for both Riverton and the State of Wyoming. Although roads and highways were his first love, he also enjoyed creating, building, and designing equipment to better facilitate the work that he loved. At the time that ‘Dick’ was leading Gilpatrick Construction Company, the business was the leader and mentor in the portability of crushing in the State of Wyoming and surrounding states. Construction was his love, hobby and to the day he died ever present in his mind and dreams. ‘Dick’ had a love for civic organizations but time was precious. He was a member of the Shriners and Masons, Past President of the Wyoming Contractors Association, Board of Directors of First Interstate Bank and its predecessor bank First National Bank, Chairman of the Board of Trustees for United Methodist Church, and loved music. He played in many bands and dances in his youth. ‘Dick’ is survived by daughter Phyllis and husband Justin Townsley of Northbrook, IL and their sons Blake Townsley and Cory Townsley also of the Chicago area. Son Richard and wife Josephine of Riverton and their children Jan and husband Chris Vokal of Maple Grove, MN and Tyler Jay and wife Tennyson Gilpatrick of Broomfield, CO. ‘Dick’ had two great grandchildren Cayden Vokal and Dylan Vokal. He is also survived by sister in law Doris Gilpatrick, brother Dennis and wife Sharon Gilpatrick and many nieces and nephews. He was preceded in death by his parents, older brother Gerald and niece Cherie Gilpatrick Johnson. ‘Dick’ interests were his family, his love of construction and the family property in the mountains. He will be sorely missed by all who knew and loved this kind, generous, thoughtful man.