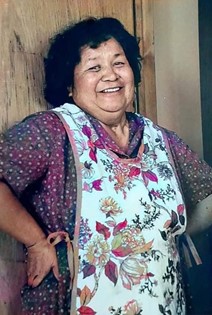 Mary Patricia (Patsy) Bell Dodge of Arapahoe passed away peacefully in her sleep on Saturday, Jan. 15, 2022, at her home. She was 98 years old.

The rosary and wake will be Thursday January 20th, 2022, 7:00pm at the Riverton Fairgrounds

The service will be held Friday January 21st, 2022 10:00am at the Riverton Fairgrounds Burial will follow at St. Stephens Cemetery

We will be following COVID-19 safety protocols very closely. Be sure to wear your mask at all times and social distance. Thank you in advance.

Mary Patricia Bell was born on the Little Wind River near St. Stephen’s Mission on March 16, 1923, to the late Isaac W.Bell and Agnes (Posey) Bell. She was number 6 of 15 children.

Her Indian name was Woncebsei “Walks Last”. She lived all of her life on the Wind River Reservation and attended school at St. Stephen's. Mary was a strong willed and determined woman.

At 13 Patsy worked at the canning factory in Arapahoe, later in life she was also an IHS housekeeper, A 4-H sponsor, and for CHR.

She married her long time love Daniel Dodge Sr, together they had 10 beautiful children

A homemaker, her family said she dedicated her life to raising her children, grandchildren, and great grandchildren. They remember her as a great cook who enjoyed hosting and gathering.

She was a true artist, always crafting up some sort of creation. Her hobbies included reading, sewing, quilting, embroidery, crocheting, needlepoint, collecting family photographs and cooking.

Mary enjoyed beadwork, listening to Pow wow music, attending pow-wows, attending grandchildren’s activities, and going to mass at her place of worship. She was excellent at everything she did

In her later years she enjoyed watching westerns, doing word search, and telling stories to her family.

She will be deeply missed by all.

Please forgive us if we have missed you or your family's name.

A complete obituary will be published soon.