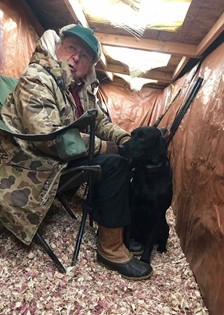 Jere was born on June 26, 1932, son of Carol and Florence (Vansickle) Bogrett in Riverton, Wyoming.

In December of 1952, he married Virginia Moss. Jere served in the United States Navy and the couple were stationed in various places.

In 1959, the couple moved back to Riverton when they bought Lee’s Cleaners which they owned and operated for the next 48 years, retiring in 1994. He also worked as a professional dog trainer, touring the country in competitions.

Jere was a lifetime waterfowler who became instrumental in getting the Ducks Unlimited Chapter in Fremont County started.

He was preceded in death by his wife, Virginia Bogrett in 2007 and his parents.

Services are under the direction of Davis Funeral Home of Riverton, WY.