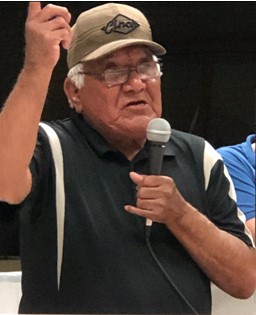 The family ask that you please follow COVID Protocol at all times, wearing your mask and keeping distance when possible

George Wells Sr. (Sihk Kiyo - Black Bear) was born on January 4, 1942 to William Wells Sr, and Isabel (Bad Marriage) Wells. He was raised in Durham, Montana on the Blackfeet Reservation by his grandparents Jim and Mary Still Smoking Bad Marriage “Inaksipstokomi.” In his early years his first language was Blackfeet and was part our cultural way of life until Jesus came into his grandparents’ life. He was always a leader in whatever he did. Music was always a big part of his life. During Christmas, George and Jay Still Smoking bought their first guitars for $10 with their per capita payments. Members of his first band were himself, Gordo Horn, David Desrosier, and Melvin “Stinog” Rutherford. It was said that their fans would be screaming in excitement when George would start singing. One of his favorite songs to sing was Fats Domino, “I found my thrill.” In the late 60’s, George preached his first sermon with his lifelong friend, Fred Bull Calf in Seattle, WA. In October 1961, George married the love of his life, Emogene (Gould) Wells from the Wind River Reservation. They were married for 58 years.

During his lifetime, he traveled to Washington, Montana, Nevada, New Mexico, Kansas, North Dakota, California, Oregon, Colorado, Utah and Canada to minister. Pastor George officiated many weddings, funerals, revivals, and camp meetings. He loved the Lord and worked for Him for the majority of his life. Dad and Mom never turned anyone away and were good Samaritans. They were famous for adopting kids in the lord along the way.

Pastor Wells (George & Emogene) continued in the ministry. In the fall of 2011, our parents celebrated their 50 Wedding Anniversary with many ministry friends in attendance.

George had various interests he loved fishing and cutting firewood. He loved basketball, especially the Wind River Cougars, he followed Gonzaga and the Kansas Jayhawks. He loved cowboys and rodeo’s and the PBR. He encouraged his grandkids to pursue riding horses and rodeoing.

In Sincere regard if we forgot anyone, please forgive us.