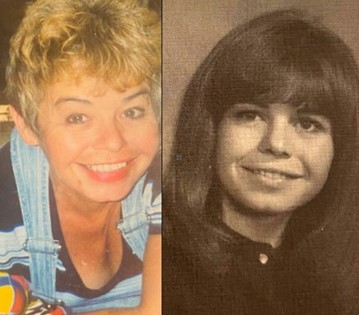 Guestbook 3
Chere Ann Stultz Gilbert of Riverton passed away on February 14, 2022, at Lakeview Hospital in Bountiful Utah with her daughters by her side.

Chere was born March 4, 1951, in Riverton to parents Carl D Stultz and Joyce H Stultz of Fremont County. She was the youngest of four children and a petite firecracker who attended Ashgrove Elementary, Riverton Middle School, and Riverton High School where she was a cheerleader. Chere graduated from Riverton High School in 1969. In 1973, Chere met John D Gilbert in Casper Wy whom she would marry in Pocatello Idaho. Chere and John then moved to Laramie Wy. John worked for the Union Pacific Railroad and Chere worked at a local bank and then opened her own women’s clothing store downtown until she sold her business in 1977. Chere and John moved west to Portland Oregon briefly before returning to Cheyenne WY.

In 1978 Chere and John welcomed there first daughter Maegan T Gilbert in Cheyenne Wy. In 1982 Chere, John and Maegan moved to Southern California where Chere welcomed her second daughter Makaela S. Gilbert in Newport Beach Ca 1983. The family moved a lot for various job opportunities. For several years Chere stayed home raising her children. As her youngest got a bit older Chere began attending California State University at Fullerton. In 1988 she got her Bachelor of Arts in Liberal Arts. She then went on to get her stock broker’s license. Shortly after completing her BA Chere was hired by Cellular One in Santa Barbara Ca but worked long hours away from home and her children. Chere chose to leave Cellular One to prioritize motherhood. She was a girl scout troop leader, an active member of the local communities she lived in, and enjoyed taking her children to the beach or the mountains to camp. In 1993 Chere returned to Riverton Wy with her two daughters.

Chere loved traveling, road trips with the windows down, music up, and the wind whipping through her hair. It was always fun trying to talk to her because she’d just get loud but the windows wouldn’t ever go up and the music wouldn’t be turned down even during Wyoming winters. She’d go anywhere to experience other cultures, the wonders of nature, and to keep growing as a person. She took her children on family trips abroad and exposed them to a variety of cultures, art, history, local traditions, and taught them to celebrate diversity. Chere didn’t care about money and would rather experience life than own possessions and waste money on “stuff” unless the money was for flowers. She was a dedicated daughter, mother, sister, and aunt who raised her children to show empathy, extend a hand to those needing one, and stand up for anyone unable to stand up for themselves.

Nomadic by nature Chere didn’t dedicate her life to one career except being a mom, for her it was about the experience and the ride. Out of the many jobs in her life, she loved teaching high school the most. She began to substitute on the Wind River Reservation at Arapahoe and St. Stephen’s schools in the mid-1990s. Eventually, this turned into a full-time teaching position at St. Stephen’s High School. Chere took her student’s love of music such as rap to help guide their creative writing and expression by analyzing the poetry of music. Her hobby was that of a dog whisperer. She would rescue any animal in need, at one time owning 7 dogs and 6 cats. Her compassion didn’t stop at animals as she also offered an open door to any of her daughters’ friends who at times needed somewhere to go. When she was ready to move on, she spent months on advertisements for each furry friend then delivered them to their forever homes all over Wyoming.

At 4’11 Chere was a determined force to be reckoned with. She never hired anyone to do a job without first trying to do the work herself. Whether she was remodeling a house, plumbing, painting, grooming her pack of animals, or rototilling the yard, Chere was jumping in with both feet first, probably barefoot. If that wasn’t successful, she’d find the book to teach her how to do it. Her greatest passion aside from being an amazing mother and grandmother was gardening. That woman could grow plants, flowers, and landscape a yard to perfection. She’d sit in her flower beds for hours to garden with Neil Young on her headphones and allow the world around her to disappear. This world was better with her in it and her absence has changed the lives of those who were lucky enough to be part of her world.

Chere’s spirit is now free to move on and no matter where that journey takes her, she’ll be a treasure to that world too. As a practitioner of Buddhism Chere believed the end of this life marks her energy’s journey to the next life she will begin. Always remember if any random scraggly dogs head your way it just may be her visiting you because the animals nobody wanted were the one’s she loved the most! May she rest in peace while we who love her endeavor to keep her memories and light alive.

Cremation has taken place and a private family gathering of remembrance will take place per Chere’s last wishes. Donations for a memorial are being made to PAWS in Chere’s name.