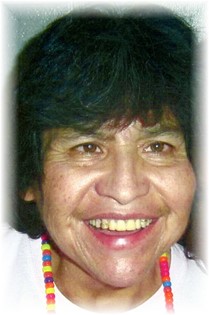 Guestbook 5
Rolanda Smith, 69, of Lander passed away on Wednesday, March 30, 2022, at the Wyoming Life Resource Center. A Rosary will be held at 7:00 pm on Sunday, April 3, 2022, at Davis Funeral Home with a wake to follow at her brother Clarence’s home, 84 2 Valley Road. A funeral service will be held at 10:00 am on Monday, April 4, 2022, at Davis Funeral Home. Burial will follow at Chief Washakie Cemetery.

Rolanda Mary Smith was born on January 6, 1953 in Lander, WY to Alexander Smith Sr. and Ellen Julia (Aragon) Smith. She grew up at Simonson Ranch before moving to Johnston Valley on the Wind River Indian Reservation. She lived the last eight years at the Wyoming Life Resource Center in Lander, WY.

Rolanda was a Special Olympics Ambassador and earned several gold medals. She was honored and rode on the float at the Lander Parade.

She was a seamstress, hostess at campus cantina, and a laundry attendant.

She is survived by special nieces, Fawn and Amy Smith of Ethete and Johnna Arthur of Laramie; and brothers, Clarence Ouray, Preston Smith, and Lauren Smith and numerous relatives.