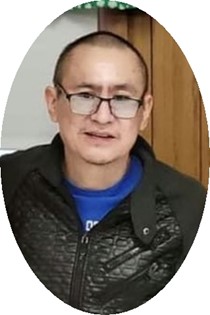 Sgt. Al Martin “Marty” Brown passed away on April 3, 2022. He was 50 years old. Traditional services will be conducted by George Moss and a wake will be held at 6:00 pm on Friday, April 8, 2022, at his mother’s Elvina Buckman residence at 357 Great Plains in Arapahoe. Services will be at 10:00 on Saturday, April 9, 2022, at 357 Great Plains in Arapahoe. Burial with military honors by The Arapaho Warrior Cpl. Billy Ferris Legion Post #96, will follow at Whiteplume Cemetery.

Al Martin Brown was born on October 27, 1971 in Lander, WY to Jerry “Bird” Brown and Elvina Buckman. He graduated from Billings High School and attended Haskell Indian Nation University. He was an enrolled member of the Northern Arapaho Tribe.

He was baptized into the Catholic faith and was a member of St. Stephen’s Catholic Church.

Marty joined the U.S. Army and went through Boot Camp and returned and married Victoria Friday in 1994 and was stationed in Honolulu, Hawaii, for three years, where they had their 1st child Alana born in 1996. He was then stationed in 1999 as an instructor at Fort Lewis, Washington His next station was Fort Sill, Oklahoma and then Colorado as a petroleum supplier before going overseas to Bosnia. He was still in Bosnia when his 2nd child, Martina was born in 2001 and then later stationed in Korea when his 3rd child, Laura was born in 2003. Sargent Brown was honorably discharged after 10 years. He was with his companion, Suzette Seminole at the time of his passing.

He worked for the Northern Arapaho Tribe as a carpenter and also as Security Guard the Little Wind Casino. He then was on VA leave.

Marty enjoyed his early morning walks, hunting, fishing, spending quality time with his three daughters, friends, and family. When his grandmother Laura, was alive he spent many hours with her playing cards.