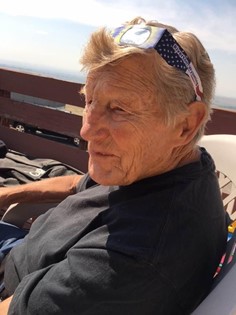 Ivan Ray Jones passed away Monday, May 16th after battling CHD and the aftereffects of Covid. He was born 04/19/1928, in Thermopolis Wyoming, the only child of Hayden (Stub) and Heloise (Nichols) Jones.

Ivan attended schools in various towns in Wyoming, graduating from Cody High School in 1947. He attended the University of Wyoming on a football scholarship and was a member of the UW football team, wrestling team and SAE fraternity. He played with the Wyoming Cowboys Football Team in the Gaitor Bowl in 1951 and they won. They were later inducted into the UW Hall of Fame in 1991. In the middle of his college years, Ivan was drafted into U.S. Army and sent first to Ft. Riley, Kansas, then to Germany during the Korean War. After that, he returned to UW for his final two years.

Ivan married Barbara Hirsig in Wheatland, Wyoming on Feb. 11, 1951. To this union two children were born, a daughter Christie and a son Courtney. After graduation from UW, the family moved to Baggs, Wy, where Ivan taught for two years. Then they moved to Riverton where Ivan taught biology and PE and coached wrestling, football, basketball and swimming.

On Nov 23rd, 1966, Ivan married Lorraine Melton. He spent many years building their home in Riverton, overlooking the Wind River Range and kept working on their cabin southeast of Dubois. Ivan loved working with rock and incorporated it into all his projects. He also continued teaching until his retirement from Riverton H.S. in 1988.

Ivan devoted his life to physical fitness and his zest for exercising enabled him to keep doing the things he loved- bicycling and running races, well into his 70’s and downhill skiing, dirt biking and stationary biking into his late 80's. He also liked to write poetry and philosophy, read science fiction, do his sudoku and don’t forget dancing. Ivan so enjoyed the company of his family, friends and all his riding buddies.

The family really appreciates all his visitors and the extra involvement from Rick, Joe and Ray right up to the end. Donations may be given to Help for Health, Paws Animal Shelter or a cause of your liking.