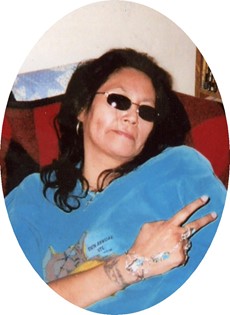 Christine was a member of the Native American Church and participated in the Northern Arapaho Sundance.

Christine worked in the casinos when she lived in Bishop but when she came home, she was a homemaker. She enjoyed cooking, baking, trying new things, and going to the casino. She loved being with family and friends.

She is survived by her mother, Catherine Addison-Duffield; companion, John Crispan; sons, Anderston “Star” Antelope and Matthew “CY” Antelope; daughter, Nicole “Nikki” Antelope-Yellowplume; adopted brother, Ronne Kane; sisters, Cora Addison, Coreen Addison, Claudia Washington and Maybethe Washington; uncles, Wayne Addison and Bert Addison; aunts, Ruby Morgan, Shirley Washington, Irene CrazyThunder and Billy Ann Shangareaux; numerous nieces, nephews, and cousins; and she took many as brothers and sisters but unable to mention all with out leaving someone out but know that you are remembered.