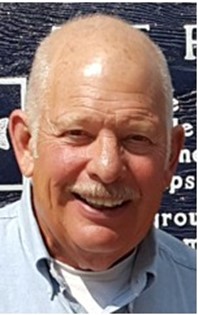 James E. Bucknell, 76 passed away peacefully on May 31, 2022, at his home in Pavillion, WY. With his wife Sherry and good friend Gloria Tomison at his side after a long, suffered battle with Parkinson’s, Dementia and Alzheimer’s disease. He was born and raised in Omaha Nebraska to Russell Walker Bucknell and Rose Ann Mary Bucknell.

He attended Saint Philip Neri and Creighton Preparatory schools while in Nebraska, upon graduation he joined the Air Force and was stationed in Texas. After his honorable discharge he moved around in the Midwest and Southwest ending up in Rock Springs Wyoming and worked for Bridger Coal as a heavy equipment mechanic for many years.

James married Sherry G. Chamberlin on March 19, 1994, in Rock Springs Wyoming. While in Rock Springs he played an instrumental role in developing the Perpetual Adoration Chapel. Loved woodworking and made beautiful furniture, enjoyed camping with family and especially taking the grandchildren camping. He and Sherry enjoyed entertaining and inviting family, friends and new acquaintances over for dinner.

After his retirement from Bridger Coal, he set out to build his retirement home in Pavilion where he enjoyed working the land, woodworking, and farming.

He had several children, James R. Bucknell of Lander, WY who gracefully excepted the responsibility of helping take care of his father. Also, Robert D. Bucknell of Rock Springs Wy, and infant Douglas Bucknell all from a previous marriage. Also step son Clifford N. Chamberlin who he loved and cherished like one of his own. He had eight grandchildren and six great grandchildren. All a mixed bag of hers, his, theirs and ours and loved each and every one and cherished the time he had with them.

Memorial Services will be held at St. Margaret’s Catholic Church in Riverton. Where he was a member, mostly attending services at St. Edwards in Kinnear. Viewing will start Monday June 13th from 6:00 p.m. to 7:00 p.m. with a Rosary taking place afterwards. Mass will be held Tuesday June14 at 2:00 p.m. In loving memory of a loyal, loving husband, loving father, grandfather and brother.

Graveside services and Military honors will be held at The Rock Springs Wy. Municipal Cemetery, Saint Joseph’s section on Wednesday, June 15, 2022, at 2:00 p.m.

In lieu of flowers a donation may be made to Saint Margaret’s Angel Fund at 220 N 7th Street E. Riverton, Wyoming 82501.