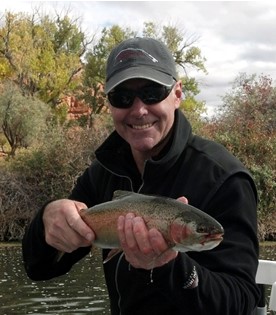 Guestbook 2
A Memorial service for James “Jim” Andre, 68, will be held at the Davis Funeral Home on Friday, June 24, 2022 at 2:00 p.m. A gathering in Jim’s honor will be held at the Riverton Country Club immediately following the service. Jim passed on June 4, 2022 in Riverton, Wyoming with family and friends by his side. He will be missed.

James “Jimmy” William Andre was born April 3, 1954, in Hot Springs, South Dakota. The first born of Carl and Judy (Becnel) Andre. He soon became a big brother and at a young age moved with his family, which now included his sister, Jayne Andre (Linck) and brother John to Riverton, WY, where they made their home. His other siblings, Jeff and JoAnne (Flanagan) soon joined the family.

Jim grew up as it seems most Wyoming kids did, hunting and fishing with his father and brothers in the fields and streams of Fremont County. An accomplished athlete, Jim participated in football, basketball and track for the Riverton Wolverines. He graduated from RHS in 1972. Jim particularly excelled on the gridiron and his special ability to throw a football earned him a scholarship to Mesa College in Grand Junction, Colorado, where he earned a degree in Recreational Management.

After earning his bachelor’s degree, Jim returned home to Wyoming, where he worked for a short time in the mines, before eventually returning to Grand Junction, Colorado. While there, Jim co-owned and operated the Blue Moon Bar and Grill, before finding his way to Aspen, where he settled.

Jim earned a Master’s of Science Degree from Utah State in Logan, Utah. Working in the food and beverage industry, he spent the majority of his career as a General Manager of Pinons Restaurant, where he ran “The Front of the House” until his retirement. He took great pride in his work and found much joy in the people he worked with and served. Jim was most at peace when in the Aspen Valley and considered it his home. He spent his free time searching for trout on the many streams and golfing the beautiful courses around his home as well as hitting the slopes during the winter season.

As an avid runner, Jim was frequently found running the roads and mountain trails that he loved. Jim competed in numerous marathons, including those in Boston, Chicago and New York. A sports enthusiast, he followed college and professional basketball and football, as well as all the PGA events.

Jim had a deep love of music, and enjoyed sharing that passion by taking family and friends to the many music venues in the Aspen/Snowmass area. Conversations with Jim almost always lead to stories of performers and shows he had recently seen.

A quick witted, intelligent, kind and giving man, Jim made lifelong friends wherever he went.

On-line condolences may be made at TheDavisFuneralHome.com. Services are under the direction of the Davis Funeral Home.