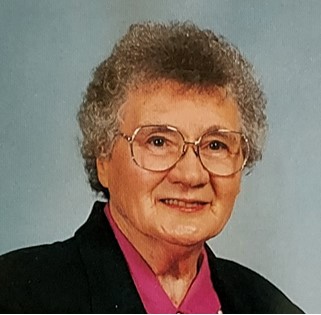 Guestbook 5
Pauline Stearns Welty, 105, a resident of Wind River Rehabilitation and Wellness went home to our Lord on July 10, 2022. Pauline Anna Dierks, was born Dec.8, 1916 to Carl F. and Helen (Wirsing) Dierks in Stuttgart, Arkansas. She was baptized on Feb. 16, 1917, at Emmanuel Lutheran Church, Stuttgart. When she was three, the family moved to Colorado where she attended school at Goodrich, Ft. Morgan, and Loveland. She was confirmed on May 24, 1931, in Zion Lutheran Church, Loveland. The Dierks family homesteaded west of Ocean Lake between Kinnear and Pavillion in 1933.

Pauline married Theodore R. Stearns, a neighboring homesteader, at Mt. Hope Church at Kinnear on February 20, 1939. They raised their four children on their dairy farm in the Pavillion/Kinnear area. They were active in the community and Mt. Hope Lutheran church where she was the organist for 23 years. Ted passed away on July 26, 1971. Pauline sold the farm to their son, Robert, and married Carl G. Welty, Sr. of Riverton on May 15, 1973. They lived in Riverton and spent winters in Yuma, Arizona until he passed away on Feb. 20, 1988. Pauline continued to travel some and was active in church, LWML, and AARP.

Memorials may be made to Trinity Lutheran Church, Riverton, or Help for Health Hospice, Riverton in care of Davis Funeral Home, 2203 West Main Street, Riverton, WY 82501.