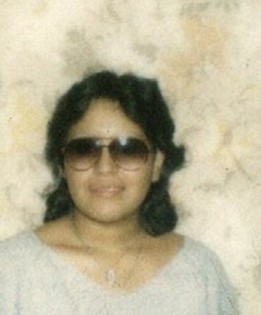 Guestbook 1
Funeral Mass for Luci "Annette" Moss Addison will be at 10 a.m. Tuesday, May 15, at St. Stephens Catholic Church. Catholic clergy will officiate and interment will be in the Arapaho Catholic Cemetery at St. Stephen's. There will be a rosary at 7 p.m. Sunday, May 13, at the Davis Funeral Home of Riverton with a second rosary at 7 p.m. on Monday at St. Stephen's. A wake will follow the Monday evening rosary at the home of Leonard and Alice Moss. Ms. Addison died at her Arapahoe home Wednesday morning, May 9, 2007, at the age of 42. Luci "Annette" Moss was born in Riverton on April 16, 1965, the daughter of Leonard R. and Alice (Spoonhunter) Moss. She attended school at Arapahoe and one year at Flandreau Boarding School in South Dakota. She grew up on the Wind River Reservation, lived in Denver for two years in the early 80s, lived in Albuquerque, N.M., for three years, and returned to the Arapahoe area in 1995. She was a member of St. Stephen's Catholic Church and her family said she enjoyed beadwork, bingo, and especially loved taking care of her three nieces and other family members. Survivors include a son, Dean Moss and his wife Donelle; daughters, Tara Bell, Wynnette Bell, and Angelina Bell; her parents, Leonard and Alice Moss; brothers, Leonard Moss, Jr., and his wife Ruth, Gary Moss, Sr., and Thomas D. Moss and his wife, Kenzie; sisters, Madonna Oldman and her husband Jerome Oldman, Jr., Deena Bell and her husband Duane Bell, Jr., Angel Bell and her husband, Byron; Ava Glenmore and her husband Mylan. She was preceded in death by a son, Richard Lonedog IV; brothers, Dean and Jerry; grandparents, Ward and Margaret Spoonhunter, Rosie Moss, Herman and Eileen Moss; cousins, Jay Spoonhunter, Mike Spoonhunter, Howard Spoonhunter, Alvin Spoonhunter, Stanley Spoonhunter, Jr., Darwin Spoonhunter, and Griz Shakespeare; Godparents, Carol Blanco and Ernest Hanway, Jr. On-line obituaries are available and condolences for the family may be made at: thedavisfuneralhome.com Services are under the direction of the Davis Funeral Home of Riverton.