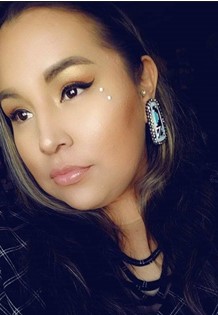 Guestbook 9
Kelli Jade White Eagle was a caring mother, daughter, granddaughter, sister, niece, aunty and friend. She began her journey home to our relatives on September 5, 2022 at age 30. She was born to Dr. Aldora Frances White Eagle and Alonzo Moss, Jr on December 3rd 1991.

While at Wyoming Indian High School, she excelled in cross country and was named all-conference and all-state during her entire high school career. She ran abroad and represented the Wind River Reservation, Wyoming, and the US. After graduating from high school, she briefly attended the University of Wyoming where she was a proud member of their ROTC program. However, her greatest accomplishment in life was becoming a mother to Khyro. Kelli was active in the Native American Church and baptized in the Catholic church.

Kelli was a social butterfly and amassed many friends. She enjoyed raisin’ hell with each and every one of them. She was hilarious and loved to sing even though it was out of tune, she lived up to her Arapaho name, Ho3o’ Niibeisei, Star Singing Woman, named by her grandfather, Aloysious Piper, Sr. She also enjoyed gambling at the casino with her grandma Laverne where they would, more often than not, leave broke. She dedicated her life to her son, Khyro. They spent their days playing dinosaurs and enjoying each other’s company. She loved her nieces Jayde, Wynter, Kensley, Kaylee, Zachy and Stevie. She doted on them especially her namesake, Jayde.

Kelli is survived by the love of her life, her son, Khyro. She’s also survived by her loving mother, Dr. Aldora Frances White Eagle who jokingly she called, “mother, mom of the home” and her father, Alonzo Moss, Jr. who she had a special relationship with, her brother, Martin James Brown, III (Keina Friday) who she lovingly referred to as Sonny, her protector and first friend, her sister Alyson SoundingSides and their husband Brian, her nieces Jayde, Wynter and Kensley, and her friend, her sparring partner and casino buddy, her grandma Laverne White. She is also survived by her godparents, her aunt and uncle, Roxanne and Dave Hines. Her grandparents: Nelson and Bonnie White, Sr., Frances Eagleman, Dorsey, Marcus, Mavis, Alvera, and Alvina Willow, Grace, Wanda, Beverly, and Hattie Willow, Katherine Vann and Rita Willow, Vern Willow, Becky Bishop, Terry and Marcine Willow, Merle Haas, Nelson Moss, Rosella Moss, Hank Left Hand, Shrana George, Joyce Hutchinson and Kay Yellowbear and Sadie Bell.

Please excuse us in our grief if we may have forgotten you. That was not our intention. Kelli was loved by many.

On line condolences may be made at TheDavisFuneralHome.com