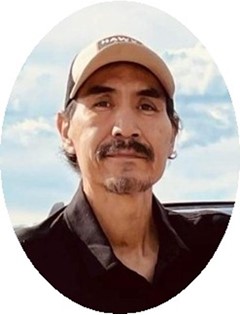 Charles Ralph Howell was born on December 27, 1974 in Riverton, WY to Gordon Howel and Julia Ann (Moss) Breun. He was given his Native American name, Hooxei hinen meaning “Wolf Man”.  He grew up in Arapahoe area and attended schools there.  He graduated from Wyoming Indian High School.  He remained a life long resident of the Wind River Reservation.

He was baptized into the Catholic Faith and also practiced the Traditional Native American Ways.

On March 10, 2001 he married Ann Jeanette Brown in Hudson, Wyoming.  They were married for over 21 years.

Charles was involved in the Joe and Eileen Moss Rodeo, enjoyed basketball, hunting, fishing, traveling to Pow-wows, watching the Wyoming Indian Chiefs in all their sports, but he especially loved to spend time with his family and the grand babies.