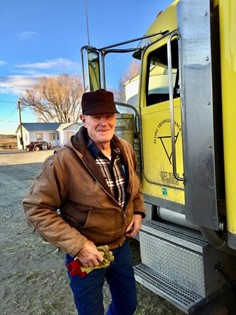 Lyle Peterson, 73 of Riverton passed away Saturday, October 1st due to a 4 wheeler accident while hunting with his son on his mountain property. A Celebration of Life will be held on Saturday, October 15, 2022, at the Reach Club House from 11:00 am to 2:00 pm. He was born June 6,1949 to Miles and Dorothy Peterson.

Following graduation from Riverton High School, Lyle moved to Henry, Nebraska to work for Middleswarth Herefords.  He worked in the uranium mine in Jeffrey City and for Miller Construction. He moved to Wright, Wyoming where he worked as a mechanic for 24 years.

Upon retirement Lyle and his wife Gail returned to Riverton and purchased the family farm where they raised cattle.  Lyle’s retirement consisted of driving truck for neighbors, hauling hay and beets, running cattle on shares and raising a garden.  He was always glad to lend a hand and help others. Lyle created many crafts made of barb wire and horse shoes that he sold at craft fairs.  He won the Best Exhibit ribbon at county fair in 2021 with his windmill.

Lyle enjoyed his time at the casino and could often be seen at the livestock auction.

Lyle is survived by his wife Gail, son Jason of Riverton, son Jeffrey and wife Tess and two grandsons Landen and Breck of Lovell, two sisters, Gwen and Jim Thompson of Idaho Falls, Leona and Alan Morisoli of King City, California and brother Dwayne and Lorri Peterson of Riverton, an aunt, Hazel Peterson of Kimball, Nebraska and many nieces and nephews.

As per Lyle’s wishes he will be cremated and there will not be a funeral.