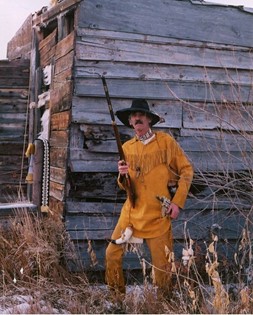 John David Moss was born January 21, 1942, in Denver, Colorado to Steven Douglas and Mary Gladys (Fagan) Moss. He grew up in the Denver area and attended Mullen High School.

After high school, Dave joined the U.S. Navy and served at the Naval Base at Pearl Harbor Historical Center. He was honorably discharged in 1963 and returned to Denver. Where he met and married Carol Sue Sandusky on November 24, 1965 in Denver, Colorado. Together they raised four children.

In October of 1968 he came to work in Riverton at the underground uranium mine, Rox Shaft. He loved Riverton and never left. He thrived as a Class B Diesel Mechanic for the majority of his career and was involved with many construction and infrastructure projects in the Fremont County area. Together, Dave and wife, Carol, ran “Carol’s Closet” an antique and 2nd hand store and enjoyed breeding poodles.

Dave was a lifetime member of the 1838 Rendezvous Association. He was known as Dave “Git R Done” Moss in that association. He enjoyed fishing, traveling for scenery, and rendezvous activities, including Mountain Man activities. Dave was a volunteer at the Heritage Center where he spent many hours giving tours and teaching about the animals, mountain men ideology and ecosystems within the museum, especially to local grade school classes who visited on a regular basis.