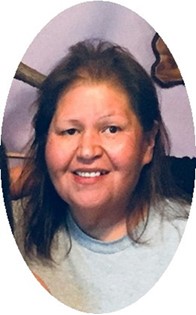 Mrs. Goodman passed away on Sunday, October 16, 2022 at her home in Arapahoe, Wyoming with her loving family by her side.

Brenda was born on January 12, 1965, daughter of John James and Donna Ree (Brown) Goodman.  She attended several different schools while growing up on the Wind River Reservation.  Brenda moved to Salt Lake City, where she lived for several years before she moved back to Wyoming and remained here until her passing.

Brenda worked in the deli at the 789 Truck Stop and various jobs while living in Salt Lake City.

Miss Goodman was baptized into the Catholic Faith.

Some of Brendas favorite things to do were to go to the casino, spend movie nights with all the kids and drive around listening to her music.  She also enjoyed camping at the Sundance, surrounded by all her family.  Brenda also enjoyed terrorizing her nephews and grandsons.  She loved to cook big meals for her Mom and Dad and the entire family.