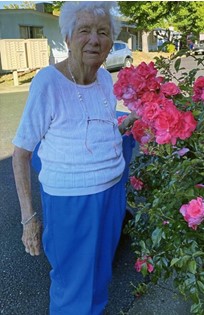 Joan “Joanie” Yates, 101 years young, passed away peacefully September 13, 2022 in her home in San Pablo, CA. She lived life large, in charge and doing it her way.  She made wonderful friends wherever she went, always interested in what the other person had to say. She had the most upbeat attitude about life. A memorial will be held next summer in Wyoming and her ashes will be scattered.

Joan F. Yates was born in Ashley County, Montrose AR to Hadden Arthur Franklin and Winifred Woodman Franklin.  She grew up in Birmingham, AL and graduated high school from there.  She then attended the University of Montevallo, in Montevallo, Alabama and graduated in 1944 with a Bachelor’s degree in Science Nutrition. Joan lived in Alabama for 18 years, Miami, FL for 5 years, Cheyenne, WY for 30 years, and San Pablo, CA for 35 years. She was a lifelong learner taking many classes at the Contra Costa Community College in San Pablo.

She worked in several hospitals in Alabama, and as a travel agent in Miami and would often travel between Miami and Cuba with clients.

She was a 35-year member of the Polar Bear Club, a group of people who swam outdoors 3 to 5 times a week in all types of weather.  She was also a member of the Red Hat Society, a member of Canasta Card Playing group, playing every Saturday, and for many years, in Cheyenne. she was a member of the Garden Club.

Joan was a world traveler having traveled to Australia, New Zealand, Italy, Morocco, Spain, China, England, Ireland, Scotland, France – visiting Monets Garden and Mexico either by cruise ship or by flying.  Joan and Martin lived in an RV and traveled the United States for 10 years enjoying all 50 states, the sights, and making friends across the country. When she was not traveling, she was helping Martin build their beautiful home in Cheyenne, that they built as they could afford supplies so it was paid in full in the end.  Joan always supported many organizations in her community, some of her loves were the San Francisco Opera, The San Diego Zoo, The National Academy of Sciences and Consumers Union.

Joan made friends wherever she went.  In the past few years, she was known as the Hershey Kiss Fairy.  She passed out Hershey Kisses to everyone she met on her daily walk around the park near her home. Joan had the most amazing attitude about life, whenever she talked with a family member or friend, she would always start the conversation by “It’s a beautiful day here in California and oh, you should see my roses!!”, even if it was a cool and rainy day. At the time of her passing she had more than 100 pots of flowers growing and blooming as well as her 6-foot-tall beautiful roses.

A friend recently texted the following:

Joan, the grandkids and I were in heavy stop and go traffic and Joan said “Look at all those lovely

people and the lovely places they are going.”

This attitude plus her many years of swimming and gardening were what contributed to her almost 102 years of age.

She will be greatly missed by her many friends and family.

Memorials may be made to the donor’s choice.