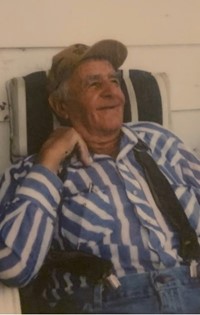 Harold “Skid” Gonka, 85, of Riverton, passed away at his home on Wednesday, October 26, 2022.  A Memorial Service will be held at 2:00 pm on Saturday, November 5, 2022, at Davis Funeral Home with inurnment to follow at Mountain View Cemetery.

Harold Gonka was born on October 26, 1937 in Shelby, Nebraska to James and Valerie (Jarecki) Gonka. He was raised in Shelby and attended school there through eighth grade.

Harold served in the U.S. Navy during the Korean War for five years.  He was discharged with the rank of BT2 (Boiler Tender 2nd Class).

On January 27, 1962 Harold married Edna Miller.  Together they raised four sons and one daughter.  They were married for 56 years before Edna passed in 2018.

After being discharged from the service, Skid went to work in the oil and gas industry. He worked in the field in various jobs and positions including, driller, oiler, roughneck, and pusher.

In 1976 Harold left the oil field and became a full-time farmer.  During his farming years he grew a variety of crops including, beans, wheat, barley, oats, hay and corn.  His specialty was raising corn, filling his many grain bins and custom grinding corn for his many friends and customers.   Harold had a knack for getting his corn planted at just the right time and always grew a bumper crop.  Harold also raised hogs, sheep, and cattle throughout the years.

Harold was well known as an avid poker player.  He had no qualms about “relieving” any of his fellow oilfield workers of their paychecks.  He also became a force to be reckoned with during the poker tournaments at the casino. Everyone that knew Skid, knew his love for poker and playing the casino machines.  If you couldn’t find him at the farm it would be a sure bet, he was at the casino.